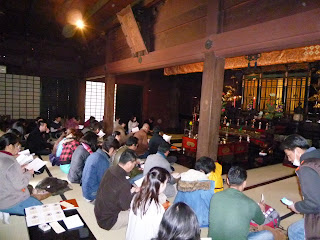 An earthquake of 9.0 magnitude and tsunami attacked North eastern Japan on March 11, in which more than hundred thousand died or are missing, loss of property in said to be great. At the moment the government is trying its best to control the nuclear plants in Fukushima from exploding.
Posted by Kawaripa Taro at 8:51 PM No comments:

Tokyo: [March 11, 2011 Friday] Around 2:46 pm a strong earthquake shook Tokyo city. Epicenter of the earthquake is believed to be around North east Japan of Miyagi prefecture. The 8.9 magnitude earthquake was followed by major tsunami around the east coast of Japan. The earthquake and the tsunami brought a lot of damage to the lives and properties with more than 1000 confirmed death, and many still missing. Tsunami virtually swallowed a town; many lost their homes and are sheltered in temporary shelters.

The damage in Tokyo city was mild compared to Miyagi and Iwate prefectures. But the earthquake sent the Tokyoite rushing in panic. Office files, equipments, books and the goods in the shelves went haphazard and crashed on the floors. In Shunjuku city of Tokyo, people poured out and crowded at Shinjuku Gyoen Park for safety from where the people watched in horror the skyscrapers in pendulum motion. All train service came to a halt, people crowded for bus and taxi. Roads were jammed, telephone and mobiles stopped working. The streets were full of people trying to find their way out to their homes. Many had to walk for more than four to five hours to home.

Overall damage to the nation is great, fires destroyed dwellings and properties. Many are rendered homeless. The government has confirmed the safety of its nuclear stations, and is doing its best to rehabilitate the people and bring normalcy. Starting from United States, many countries have promised relief fund and services. Japan has been a generous nation when ever natural disasters occurs around the world, it is now time for the world to repay the gratitude, especially the country who has been receiving Japanese ODA despite being the world second largest economy.

This is said to be the highest earthquake magnitude ever recorded. 1923 Kanto earthquake recorded 8.3 magnitude with 143,000 people's death, and 1996 Kobe earthquake with 7.2 magnitude in which 6,400 people died. While it may be a proud moment for the Japanese building technocrats that the skyscrapers of world height withstood such magnitude, it is equally a great message to the humanity about the lurking natural disasters to convey the precariousness of human existence despite scientific progress.

Tibetan 10th March uprising anniversary was observed on the day [Thursday] at two places in Tokyo at Joenji Temple and Nihonbashi. Japanese monks for Tibet and M/s Open Sense organized the events respectively. The main event scheduled on 13th March by Tibetan Community and the Japanese Support groups to conduct peace march in the city, and Students for Free Tibet's plan to demonstrate before Chinese embassy had to be cancelled because of the earthquake tragedy. As of now, no report has come about Tibetans being affected by the tragedy.
Posted by Kawaripa Taro at 5:47 AM No comments: