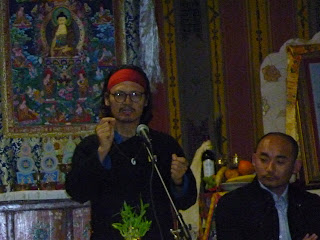 San Francisco: A renowned Tibet activist Tenzin Tsundue gave a talk to the Tibetans in Bay area at the Tibetan community hall in Richmond. He received a Hero's welcome and standing ovation. Wearing his trademark, the red band around his head, the Tibetan activist talked to the fully packed hall, and reminded the fellow Tibetans not to forget the Tibetan struggle for freedom and justice. He said that meaningful result would come only if Tibetans all around the world wholeheartedly take the Tibet issue seriously and contribute accordingly.

"The worlds, especially the developed nations, are only interested in maintaining a good business and economic relation with China for their own national interest. The business and economy of China is in the hand of a few communist leaders. So, these leaders and the Western nations are prospering through their lucrative economic partnership. In this, even the Chinese people are victims. Natural resources of the colonized regions are exploited, and with the cheap labor, Chinese product is invading the world market. The fine copper in used in Chinese goods come from Tibet; uranium is dug from Inner Mongolia. Therefore, we need to create our own environment to resolve the Tibet issue rather than relying fully on the Western support." He said.

On the recent spate of self-immolation taking place in Tibet, Tenzin expressed his solidarity with the people in Tibet, and described the situation as very volatile. He said that the standard of Tibetan resistance movement has achieved high status compared to the early 1950's. He stressed the importance of non-violent nature of Tibetan struggle, and preservation of Tibetan culture and moral ethics, and urged the Tibetans in the region to practice Tibetan language and culture.

On Tibetan Autonomy and Tibetan Independence, he said autonomy is a policy and a method, not the objective. If Tibetan people are to rule and manage Tibet, and prosper in Tibetan way, independence is indispensable. But let us not divide ourselves on these two points, serious and sincere struggle is the need of the time. Arguing over the things that are not under our control is useless. He said.
Tenzin Tsudue replied to the numerous question raised by the audience. He also spoke on his recently published book, "Resistance - Tsengol". A few books that he has brought with him got sold out, many placed order for the book.

Many thanked the Activist for his sacrifice and struggle for the common cause, and expressed support to his activity. Some remarked that the Community hall was bought in 2004, many gatherings were done since then, but the fact that the gathering on the day was largest shows the popularity of Tenzin Tsundue, and Bay area Tibetan people's respect to the Activist. The magnitude of the gathering and the people's attentive listening followed by questions from every corner confirmed the heroic status of Tenzin Tsundue in Tibetan people's heart for his selfless determined struggle for Tibetan freedom and justice. 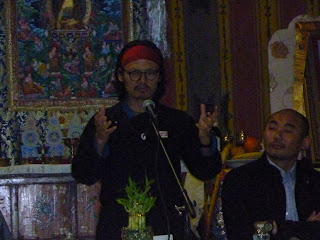 Tibetan Association of Northern California (TANC) and Regional Tibetan Youth Congress organized the talk event. Tenzin Tsundue was on the last leg of his one month tour in Taiwan and the United States.
Posted by Kawaripa Taro at 3:26 PM No comments: