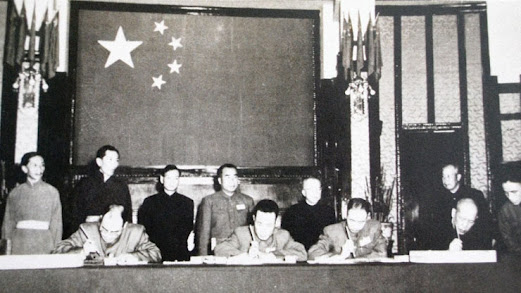 ２In 763 AD, the Tibetan army of King KhrisrongDeutsan captured the Chinese capital Ch’ang-an, the Chinese Emperor fled with his family and a large following. TseponShakabpa, Tibet – A political history, p-39

４(1) Prof Hon Shing Lau, The Political Status of Tibet during Ming Dynasty: An analysis of some historical evidence, City University of Hong Kong, (2)Chinese Voices for Tibet, DIIR,( a) Cao Changqing, Independence – the right of Tibetan people, p-80; (b) Chen Pokong, Has Tibet belong to China since ancient times?, p-164; (c) Zhu Rui, Tibet has not been a part of China since ancient times, p-193

５Tang Huiyun, “Why are people in Hong Kong are concerned about the Tibetan problem?”, p-61, Chinese Voices for Tibet, DIIR

７ “Everything is negotiable except the independence of Tibet” – Deng Xiaoping

８Article-4, “Regional autonomy is practiced in areas where people of minority nationalities live in compact communities…….” and Article-2,4 and 11 of Law of the PRC on Regional National Autonomy

Posted by Miudhungdrug at 12:19 AM No comments: 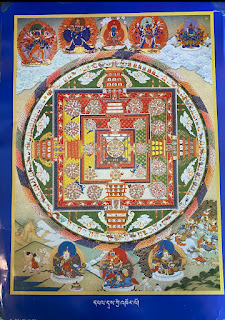 Posted by Miudhungdrug at 12:45 AM No comments:

Email ThisBlogThis!Share to TwitterShare to FacebookShare to Pinterest
Labels: His Holiness the Dalai Lama, Japan, Religion and Culture

70 Years of repression in Tibet since the 17-Point Agreement 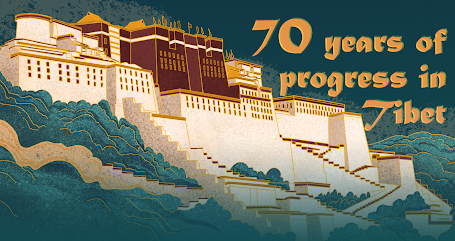 China has, on May 21, published yet another White Paper on Tibet, "Tibet Since 1951: Liberation, Development and Prosperity"[1]. It says, "On the occasion of the 70th anniversary of Tibet's peaceful liberation, we are publishing this white paper to review Tibet's history and achievements, and present a true and panoramic picture of the new socialist Tibet."

It has claimed Tibet as being part of China since ancient times, and how through the signing of the 17-Point Agreement, Tibet was liberated from foreign imperialists and feudal theocratic serfdom. It has claimed regional autonomy, democracy, development, and religious and cultural freedom for all these 70 years. This is yet another blatant Chinese propaganda to mislead the international community and distort the historical reality.

May 23, 2021, marks the 70th anniversary of the controversial 17-Point Agreement between Tibet and China. It was expected that China would once again flaunt this document to brag about the unification of Tibet with the motherland. But this time, they came with a white paper on the Agreement. Chinese claims are nothing new; these claims were well rebutted in the DIIR's publications, "Tibet was never a part of China,  but the Middle Way Approach remains a viable solution".

This time China's white paper greatly relied on the 17-Point Agreement to justify its occupation of Tibet. So, let us review the Agreement and see if China's claims are justified or not. We also request the CCP leadership to look at this forced Agreement more to resolve the Tibet issue rather than celebrate it as a victory.

The 17-Point Agreement is a very important valid historical document that reveals the real nature of Sino-Tibetan relations at that crucial turning point of the Tibetan history of independence. Although forced upon the Tibetan government by communist China, it remains as an important testimony to the fact that Tibet was never a part of China before the Agreement.

From the historical perspective, it is very important to assert here that Tibet has never been a part of China anywhere in its pre-1949 history[2]. Yes, the Mongolian, Nepalese, Chinese, and British army did enter Tibet and exercised suzerainty over Tibet at a certain period of Tibetan history. But they came as foreign entities, as invaders or at the request of the Tibetan government, and they left when their missions were accomplished. China cannot claim Tibet because of these historical skirmish incidents. If they did, others could also do the same, for that matter; even Tibet can claim China as a part of Tibet[3]. These skirmish incidents are natural and in conformity with the political history of almost all nations around the world.

Communist China has tried to claim Tibet as a part of China under various insubstantial grounds. But like most of its concocted propaganda, the nature of the claims kept changing. First, they claimed Tibet as a part of China since the 7th century Tibetan emperor Srongtsan Gampo [Tib: Srong btsan sgampo], when the Tang Princess Wencheng Kungchu became one of the queens of Tibet. Later, the Chinese White Paper[4] claimed that they inherited Tibet from the Mongolian Yuan Dynasty in the 14th century and later from the Ming and Qing Dynasties. But these fictitious and deceptive claims intended to distort history were refuted strongly even by the Chinese scholars[5]4.

Many believe that the 17-Point Agreement with China was the end of Tibetan independence. No, in fact, the 17-Point Agreement is an important document to prove that Tibet has been an independent nation. The Agreement is also a testimony to the fact that China agreed for “one country, two systems” formula for Tibet. The nature and the outcome of the Agreement also reveal the real imperialistic color of Chinese communism. Although the Agreement was signed under duress, His Holiness the Dalai Lama and the Tibetan government tried their best to accommodate the Chinese demand. When China got confident that the land was fully under the control of its People Liberation Army (PLA), they began to violate the Agreement. This is how China, under the communist regime works. Hong Kong and Taiwan should learn from this Tibetan experience and be wary of Chinese overtures[6].

Now, in order to resolve the Sino-Tibetan issue, His Holiness the Dalai Lama and the Tibetan Administration in exile have proposed solutions in the form of a Five-point peace plan in 1987, Strasbourg proposal in 1988, and the Memorandum on Genuine Autonomy in 2008. These three proposals can be seen as the three-core Tibetan approach to resolve the Tibet issue. It shares many common elements with the 17-point Agreement[7], Premier Deng Xiaoping’s statement[8] and the Chinese constitution[9], the three-core Chinese approach.

The 17-Point Agreement, although signed under duress, it gave China the much-needed excuse to get into Tibet. When His Holiness the Dalai Lama refuted it on April 1959 at Tezpur in India[10], the International community came to know the truth about the Agreement and China lost the legitimacy to occupy Tibet. So, from the point of International law, China’s occupation of Tibet is illegal[11]. As a rising superpower and as an important member of the United Nations, China needs to redress this historical faux pas to gain moral and international legitimacy to its claim on Tibet. Through intimidation and brutal occupation, China has achieved all the points mentioned in the 17-Point Agreement. If China is serious about resolving the Tibet issue, it sincerely needs to brood over those points which it agreed to give to Tibet but never did, they are:

The 3rdpoint of the Agreement: “The Tibetan people have the rights to exercise national regional autonomy under the unified leadership of the Central People’s Government.”

The 7th point: “The religious beliefs, customs and habits of the Tibetan people shall be respected, and lama monasteries shall be protected..”

The 11th point: “The local government of Tibet should carry out reforms of its own accord, and demands for reforms raised by the people shall be settled by means of consultation with the leading personnel of Tibet.”

These four points which China promised Tibet are still not fulfilled, rather China has violated it.

The Memorandum on Genuine Autonomy for the Tibetan people submitted to the Chinese leadership in 2008 should be studied in this context. To what extent the Memorandum has deviated from the three-core Chinese approaches. More importantly, it should be studied whether the Memorandum is within the purview of the Chinese constitution or not, if not to what extent it has digressed. These are the common grounds on which Tibet and China need to discuss and negotiate to arrive at a mutually acceptable agreement.

Much to the chagrin of communist China, the 17-Point Agreement of 1951 still remains an important document to prove that Tibet was an independent nation before the Chinese invasion. However, as the Tibetans are not seeking separation from China now, the document can play a crucial role in finding common ground based on the Middle Way Approach of His Holiness the Dalai Lama and the Tibetan Administration in exile. The three-core approaches of Tibet and China could be the Zone of Possible Agreement (ZOPA), where solution to the Tibet issue could be found. A strong will and sincere effort from the Chinese leadership to brood over the ZOPA sphere would be more mutually beneficial rather than harping on the immoral victory it contrived through the 17-Point Agreement.

23rd May should be a day for the Chinese leadership to look back and see what it promised to the Tibetans and what it really delivered, and how it still could help find a common ground to resolve the Tibet issue. Therefore, the Chinese leadership, instead of making false claims, should seriously study and reflect on its conduct to see if they have really delivered the promises it made to the Tibetans.

A recent panel discussion organized by Geneva Tibet Bureau on the "17-Point Agreement and the 70 Years of Oppression in Tibet" by a high-level international panelists has more on this subject[12].

In 1954, China signed Panchsheel Agreement with India, in which peaceful co-existence and non-aggression into one another's territories were agreed upon, but in 1962 China attacked India. Just a few years ago, in 2017, China intruded India and Bhutan's territories through Doklam incident. Last year, China made illegal aggression into the Indian territories of Ladakh.

China and the British government had issued a Joint Declaration in 1984[13] in which a high degree of autonomy was agreed to Hong Kong after the takeover in 1997. Clause 3 of the Joint Declaration details the privileges that Hong Kong will have. But we have all seen last year what has happened in Hong Kong and what is the situation right now?

This is what exactly happened in Tibet 70-years ago. It was not liberation, development and prosperity as China claims; it was 70 long years of repression, deprivation, and discrimination. If China is serious about the claims it has made in the white paper, it should let the UN mission, diplomats and media to visit Tibet and confirm the situation.

Yesterday`s Tibet is today`s Hong Kong; if we let Tibet and Hong Kong go like this, it will soon be Taiwan, Spratly Island of the South China Sea, Senkaku Island, and so on!

[3]In 763 AD, the Tibetan army of King Khrisrong Deutsan captured the Chinese capital Ch’ang-an, the Chinese Emperor fled with his family and a large following. Tsepon Shakabpa, Tibet – A political history, p-39

[5](1) Prof Hon Shing Lau, The Political Status of Tibet during Ming Dynasty: An analysis of some historical evidence, City University of Hong Kong, (2)Chinese Voices for Tibet, DIIR,( a) Cao Changqing, Independence – the right of Tibetan people, p-80; (b) Chen Pokong, Has Tibet belong to China since ancient times?, p-164; (c) Zhu Rui, Tibet has not been a part of China since ancient times, p-193

[6]Tang Huiyun, “Why are people in Hong Kong are concerned about the Tibetan problem?”, p-61, Chinese Voices for Tibet, DIIR

[8]“Everything is negotiable except the independence of Tibet” – Deng Xiaoping

[9]Article-4, “Regional autonomy is practiced in areas where people of minority nationalities live in compact communities…….” and Article-2,4 and 11 of Law of the PRC on Regional National Autonomy

Posted by Miudhungdrug at 12:30 AM No comments: