The Kangra Fort in Himachal Pradesh

Kangra Fort; An ancient history of a Hill Kingdom 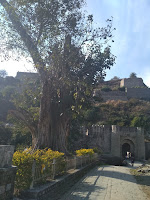 Kangra Fort is some 24 kilometers from Dharamsala, Himachal Pradesh. The Fort stretches along four kilometers with number of gates built by the kings and the invaders. According to the audio-guide at the premises, the Fort was built by Maharaja Susharma Chandra some 3500 years ago, and that there have been some twenty Kings before him. It is perhaps the first Fort in the Himalayan region, and for that matter in India. History of the Fort and Kangra Kings date back to the Alexander's time around 326 BCE, when the Indian King Raja Permanand Chand, popularly known as Porus, checked the advance of Alexander the Great. Although historian differs about who actually won the war, it was a fact that many lives were lost during the battle. After a peace treaty, Alexander was said to have returned the same year with a daughter of King Porus. Trigarta Raja Katoch was said to be the direct descendant of King Porus. 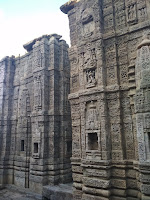 Mehmood of Ghazni looted the Fort in 1009 AD. Although the Mughal Kings, the invaders from the Afghanistan tried to take over the Fort several times, it remained intact with the Rajput Kings. It was said that "he who rules the Fort, rules the hills". However, in 1620 AD, Mughal King Jahanghir, the son of the legendary King Akbar, took over the Fort after fourteenth-month siege. Some 12,000 Katoch force died defending the Fort. Jahanghir was so happy of his achievement that he pardoned Raja Hari Chand Katoch. The Raja, later organized gaurilla war, unfortunately he was caught and tortured to death. 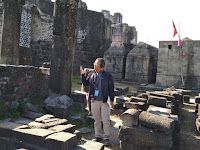 Later, Raja Gamand Chand was able to reorganize the Katoch force and the people, and gained victory over the Mughal force. But it was only during his grandson Raja Sansar Chand's time that the Fort came back to the Katoch royal family in 1787 AD. Raja Sansar Chand ruled Kangra well, and the land prospered during his reign of twenty years, and it went down in Kangra history as the Golden age. 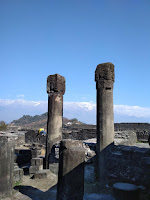 However, Raja Sansar Chand was ambitious, he subdued the neighboring princely states, and later attacked Bilaspur Gurkha Raja in 1803 AD. This proved to be a fatal mistake. The neighboring twenty two princely states took the opportunity to take revenge and joined the Gurkha Raja to make a collective attack on him. Raja Sansar Chand reluctantly appealed to his adversary King Ranjit Singh of Punjab for help.  King Ranjit Singh did helped him, but Ranjit Singh took over the Fort and 66 Katoch villages. Raja Sansar Chand retired to a secluded village with one of the dancing girls in his court, and he died in 1823 AD.

The Fort remained under the control of the Sikh Rajas until 1946, after which the British government took over along with other states. In April 1905, a devastating earthquake destroyed the Fort badly and the Fort was evacuated. Later the British handed over the Fort to Jai Chand Katoch. The last of the Royal Katoch, Druv Dev Chand, joined the Indian States in 1947. 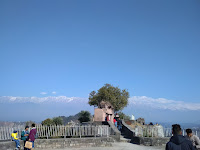 There are many gates and Temple structures in the Fort. At the summit, you will find Shree Adinath Jain Temple and Ambika Devi Temple, a testimony of religious harmony. Ambika Devi is said to be a Hindu goddess, personification of female energy. Katoch family has been worshiping this goddess since ancient time. As you ascend the Fort, gun slit openings could be found all along the fort's wall, through which the Katoch force obstructed the enemy's advance. A wide courtyard lies at the top with ruins of Temples, houses and pillars. A beautiful panoramic view of the Dhauladhar ranges in snowy garb far away from the summit is mesmerizing, and you can't help wondering that these mountains were the silent witness of the turbulent time the Fort endured. 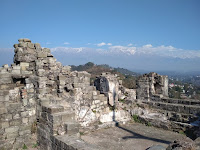 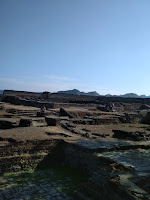 Note: Above is a personal note based on the author's visit to the site, and the audio-service and information board at the Fort. Error and omission cannot be ruled out. Names are transcribed from the audio, they need to be confirmed. Anyone wanting to have a real serious history of the Fort should seek it from a reliable source or visit the Fort.

Posted by Kawaripa Taro at 6:29 AM No comments:

Email ThisBlogThis!Share to TwitterShare to FacebookShare to Pinterest
Labels: History 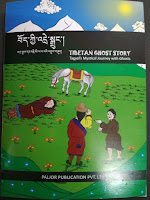 A Tibetan Ghost Story: Mystical Journey of Tagyal with Ghosts
by TG Arya & J. Sangpo
Illustrations: Yungdrung Rapten
Editorial: Dr. Lauren Alderfer, Ms Memee Kemphal and Tenzin Tsepag
ISBN:978-81-86230-83-1
Here is a typical Tibetan ghost story which has survived orally and has now been put into writing for the first time. It is a story of Tagyal, a man who went looking after a lost yak, but he found himself in the company of ghosts and lived with them for sometimes. Later, he was able to come out of their world and return to normal life. He narrates his experience of this mystical journey with the ghosts. How he came across them, how the ghosts bring trouble and harms to the people and how the Tibetan Lamas and religious rituals bring the ghosts under control. The story will give some idea about the ghosts and how they are dealt in Tibetan community. The book is available at www.paljorpubications.com for Rs.99/-

Posted by Miudhungdrug at 9:10 AM No comments: