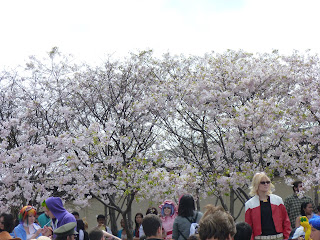 San Francisco: [April 22, 2012 Sunday] Japanese Community in Northern California organized "Cherry Blossom Festival" on April 22, in San Francisco downtown city. A grand parade with Japanese and local people in traditional Japanese attire passed the Japan town street dancing and singing. The most captivating of the parade was the group doing the "Taiko" Japanese drum beating. It was a grand show of Japanese presence in the city. 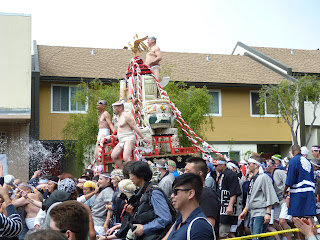 Cherry blossom, Sakura flower is greatly loved and admired in Japanese culture as the harbinger of spring season. Japanese parks, gardens and countryside are full of Sakura flowers at this season. People flock in great numbers; they sit under the sakura trees, and welcome the season enjoying "Hanami" the beauty of the flowers with drinks and songs. 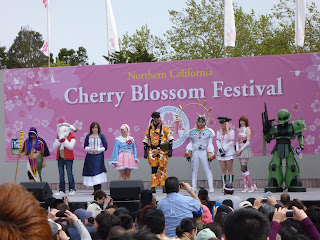 Cherry Blossom Festival Parade in San Francisco drew large spectators, and people enjoyed the festival very much. Japanese shopping and eating malls were full of people. It was a great business day for them. Sakuru flowers in San Francisco, although very few, bloomed in great beauty, and inspired the people to appreciate its beauty and live in close proximity with the nature. Sakarua festival is a great gift from SJapanese community to the world to see and to feel the beauty of flowers.
Posted by Kawaripa Taro at 10:33 AM No comments: