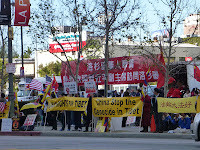 San Francisco, November, 17, 2012: Tibetans in North and South California gathered in Los Angeles city to draw the attention of the visiting Vice President of China, Xi Jinping, to the on-going crackdown and repression in Tibet. The Chinese leader, leading a delegation of more than hundred officials landed in the city on February 16, and stayed at 54-storeyed JW Marriott in LA downtown. His visit and the schedules in the city for two days were hotly pursued by the Tibetans, and the Chinese activists. Tibetan Snow-lion flags, and placards and slogans demanding the end of brutal communist regime in Tibet filled the Los Angles streets. 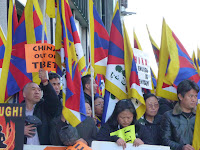 More than two hundreds Tibetans and supporters from San Francisco took buses and vans to L.A. and joined the fellow Tibetans and supporters in the city. On the morning of November 16, demonstration was done before the China Mart USA building. China Mart is a registered entity created to support Chinese companies to move into the US market and sell their products. The Chinese delegates attended a grand business meeting with the US counterparts in the Mart.

Tibetans and their supporters stood around the building throughout the meeting and shouted slogans to draw the attention of the delegates on the current situation in Tibet. A Tibet supporter sneaked into the meeting, he raised Tibetan national flag and shouted "Human rights is more important than business". He was soon arrested and taken away. Some American delegates when coming out of the meeting raised hand to the demonstration to show their support. One of them even joined the demonstration.
The main demonstration was done at JW Marriott, a luxury hotel in the town, where the Chinese leader stayed and attended official luncheon and dinner party. 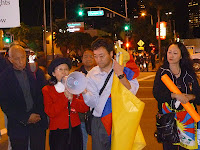 Representatives of Tibetan community in Southern and Northern California addressed the gathering about the purpose of the demonstration, and urged the international community to pressure the Chinese leader to stop repression and persecution in Tibet. A Chinese lady spoke for freedom and justice in Tibet and China. Mr. Tenzin Choden, a former Tibetan legislative member spoke about the on-going repression and brutal policy of Communist government in Tibet. 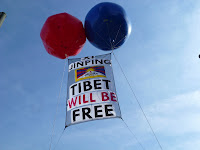 A large banner reading "Xi Jinping, Tibet will be Free" lifted by two large balloons stood hanging in the sky before the JW Marriot Hotel.

Since March, 2010, more than 24 monks, nuns and laypeople sacrificed their lives through self-immolation to protest the brutal Chinese rule in Tibet, and called for the return of His Holiness the Dalai Lama in Tibet. Experts and Tibet analysts have said that this continuous spate of self-immolation by the Tibetans is indicative of the growing repression in Tibet, and the desperate attempt by the Tibetans to draw the attention of the international communities.

The protest and demonstration continued the next day before the Hotel. Around hundred Falung Gong Practitioners sat at the designated place and observed silent meditation throughout the day. Chinese supporters came with large Chinese flags and staged lion-dances, with the beating of drums and cymbals. They were there to welcome the Chinese leader and the delegations, and to perform at the Hotel. One interesting aspect of the demonstration was that the Tibetans, Chinese and the Falung gong practitioners all shared the same pavement before the Hotel, and no major clashes or untoward incidents was registered.

In fact, many Tibetans and Chinese got good opportunity to talk face to face and exchange their respective ideas. When the discussion became too hot, a security officer would come and say "no fighting and abusive language", and the situation got restored. Some Tibetans who could speak Chinese language did good talking with the Chinese people and conveyed the Tibetan stand-point. Some Chinese secretly reported that they were paid US$ 200/- to attend the gathering. Some Tibetan remarked that it was good to talk with the Chinese at individual level, "they were more receptive and open". 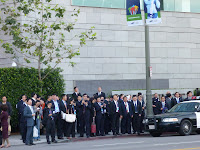 Chinese delegates before the Hotel taking pictures of the demonstration.

Although, Xi Jinping managed to avoid direct confrontation with the demonstration, his delegations saw and heard what the demonstrators wanted to convey. But on the 17th evening, when Xi Jinping left the Basketball hall behind the Hotel, he could not avoid the demonstrators. Through the black-window of his car, he saw and felt the heat of Tibetan demonstrators, and he read the Tibetan message loud and clear, "Free Tibet Now".

The demonstration at L.A. by the Tibetans conveyed clearly to the Chinese leaders and the delegates that the world is watching China and that they must stop the repressive policy in Tibet. It conveyed to the Tibetan brothers and sisters in Tibet that they are not alone, that the Tibetans outside Tibet are always with them. The demonstration also established the fact and confirmed to the international media and supporters that the Tibetans across the world will continue to protest until the dawn of real freedom in Tibet. 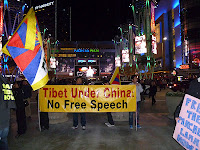 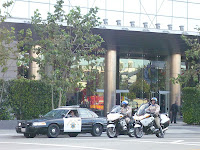 Posted by Miudhungdrug at 9:28 PM No comments: