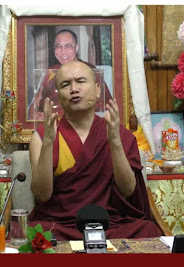 The Three Turnings of the Wheel of Dharma

Below is an extract from the teaching Geshe Dorji Damdul gave on Mulamadyamikakarika Class-1 in August 2014 at Tibet House. The extract relates to the Three Turnings of the Wheel of Dharma. It has been updated with the Geshe la's online teaching on June 4, 2022 at Nalanda Certificate Course-1.

In the first turning of the wheel of Dharma at Sarnath, Buddha taught the Four Noble Truths. He said everything exist objectively. The target audiences were the followers of the Vaibhashika and Sautrantika schools.

In the second turning of the wheel of Dharma at Rajgirh, Buddha taught Emptiness. Here he said there is no objective existence, everything exist subjectively. The target audiences here were the followers of the Madhyamika school.

When Buddha was asked about the contradiction, he said that all phenomena existence or non-existence that comes to our mind can be categorized into three natures:

In the third turning of the wheel of Dharma, Buddha taught to explain the Fourth Noble Truth, i.e. the Path leading to the cessation of suffering. That path is the mind, the subtle clear light mind to achieve enlightenment.

Note/Disclaimer: It is a student's note only. There may be error or misinterpretation. A serious student should reach Geshe la's teachings at the Tibet House. རང་གི་ཡིད་ལ་སྒོམ་ཕྱིར་ངས་འདི་བྲིས། I write this just for my memory and learning.

Posted by Miudhungdrug at 5:32 AM No comments: