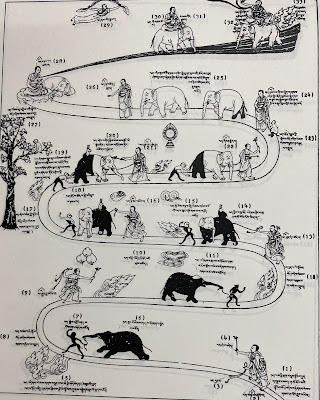 Sems gnas dgu, the Nine Stages of Meditation: It is the practice or process of meditation associated with achieving Shamatha [Tib:zhi gnas] and Vipasyna insight [Tib:lhag mthong]. Arya Maitriya has explained these stages of meditation in the Mahayanasutraalankara[1], Ornaments of Mahayanasutra [Tib:theg pa chen po mdo sde rgyan]. The nine stages can be seen beautifully illustrated on Tibetan thangkas, a religious art, where the mind, distractions, efforts and the meditator's progress are displayed through the metaphor of an elephant, a monkey, a monk and others. Let us see what these nine stages of meditation and the metaphors are all about.

Description of the illustrations:

The illustrations on the thangka represent the nine stages or processes through which a meditator passes on his way to achieve the calm abiding mind, Shamatha.

1.      The first stage, Setting the mind [Tib:sems 'jog pa], is represented by a monk at the bottom right of the thangka; he is initiated to meditation through the power of Hearing [Tib:thos pa'i stops]. The meditator attempts to place his or her mind on the object of meditation. He has a hook in his right hand, signifying Awareness [Tib:shes bzhin][2], and lasso in the left hand, signifying Mindfulness [Tib:dren pa]. The elephant represents the mind, and its black color signifies laxity, dullness, and sinking [Tib:'bying ba]. The monkey represents distractions and temptations, [Tib:'phro ba], and its black color signifies mental scattering, rgod pa. The silk cloth between the monk and the elephant represents sensual touch, a distraction. A fire before the monkey is the strength or effort of Awareness and Mindfulness with which a meditator needs to work on the objection of meditation.

2.      The second stage, Continual setting, [Tib:rgyun du 'jog pa]: The waterfalls represent a stream of thoughts flowing in the mind which distracts one's concentration. An effort is made to have the mind continually stay on the object of meditation. The figures of fruits and a conch shell with incense represent taste and smell, sensual distractions. At this stage, the mind gets a little mindful, as reflected by the appearance of white color on the head of the elephant. But it is still led by the monkey, the distractions.

3.      The third stage, Further setting, [Tib:glen te 'jog pa]: The elephant with its head all white turns to the meditator. Noticing distractions, an effort is made to bring the mind back to the object of concentration. The meditator has his lasso tied on the elephant. This means that the mind has become attentive to what the meditator is doing. Here, a black rabbit appears on the elephant, it represents the emergence of subtle distractions, [Tib:bying ba 'phra mo], in mind. A pair of cymbals is depicted representing sensual distraction of sound, sgra.

4.      The fourth stage, Closely setting [Tib:nge bar 'jog pa]: Here we see that the elephant, the monkey, and the rabbit are all paying attention to the meditator signifying progress in the meditation. The mind with its gross and subtle distractions has noticed the meditator's effort to lead them. A close concentration is maintained on the object of meditation.

5.      The fifth stage, Disciplined setting [Tib:dul bar byed pa]: Now the meditator is leading the three animals representing mind, gross and subtle distractions. This indicates a degree of control over the animals, i.e. the mind and the distractions. We see a wish-fulfilling jewel, nor bu, representing the bodily aspect of the five sensual desires. The fire of effort has also become small, meaning less effort is needed to concentrate. Here the distractions are rejected and the virtue of a calm-abiding mind embraced.

6.      The sixth stage, Peaceful setting [Tib:zhi bar byed pa]: The meditator is peacefully leading the elephant and the monkey, the mind and the distractions. The rabbit has disappeared, meaning no more subtle distractions. The distractions are overcome and the mind is pacified of all aversion toward meditation due to mental afflictions. The mind has become calm and peaceful.

7.      The seventh stage, Complete pacification [Tib:rnam par zhi bar byed pa]: The elephant has become almost white, and the meditator bid farewell to the monkey, signifying peaceful mind and no distractions ahead. The lasso has been eliminated, meaning no need to control the mind with effort. Equanimity of the mind is maintained by overcoming the slightest disturbance and aversion.

8.      The eighth stage, One-pointed setting [Tib:rtse gcig tu byed pa]: Now there is only the meditator and the elephant (mind). The elephant has become totally white, pure, and free from distraction, following the meditator obediently. Here freedom from all kinds of distractions is achieved and the mind is in full concentration.

9.       The ninth stage, Equanimity and equipoise setting [Tib:mnyam par 'jog pa]: The elephant, the mind, is completely in peace and in equanimity with the meditator. The highest state of meditation is achieved where no effort is needed to have the mind stable on the object of concentration.

This is how a calm-abiding mind [Tib:zhi gnas, Sans:shamatha] is achieved through the Nine Stages of Meditation. There are some illustrations above the ninth stage, let us see what they represent. After having achieved a calm-abiding mind, one can experience bodily and mental bliss and pliancy.

In figure 29, the monk flying in the sky, signifies the attainment of the mystical power of the suppleness of the body [Tib:lus shin sbyangs]. The figures 30 and 31, the monk on the white elephant, show the attainment of a calm-abiding mind [Tib:zhi gnas] and mental pliancy [Tib:sems shin sbyangs]. The figure 32, the monk on the elephant with a wisdom sword, indicates cutting the root of samsara through the joint application of the calm-abiding mind and the wisdom of emptiness. The figure 33, a fire behind, represents the power of Mindfulness [Tib:dren pa] and Awareness [Tib:shes bzhin] to achieve the complete realization of the wisdom of emptiness of self and of all phenomena.

To pass through these Nine Stages of Meditation smoothly, Arya Maitriya has warned of five obstacles or mistakes and taught eight antidotes to overcome these obstacles. They are explained as follows[3]:

(A) Antidotes for the mental laxity and slackness [Tib:le lo, Sans:kausidya] are four; 1) Trust [Tib:dad pa, Sans:sraddha], 2) Determination [Tib:'dun pa, Sans:chanda], 3) Perseverance [Tib:brtson grus, Sans:virya], and 4) Tranquility [Tib:shin sbyang, Sans:prasrabdhi]. One needs to have a strong belief or trust in the positive aspects of meditation and have a strong determination to pursue meditational practices. One must make an effort, persevere in the practice and have a positive frame of mind and tranquility.

(B)   Antidote for the Forgetfulness [Tib:rjed pa, Sans:musitasmritita] is 5) Mindfulness [Tib:dren pa, Sans:smriti], one must an make effort to put conscientious effort to concentrate on the object of meditation.

(C)   Antidote for the Sinking and scattering mind [Tib:bying rgod, Sans:nirmagnataauddhatya] is  6) Awareness / comprehension [Tib:shes bzhin, Sans:samprajanya], a close watch and detection of sinking or scattering mind should be made and have the mind focus properly on the object of meditation.

(D)  Antidote for the Effortlessness or inability [Tib:'du mi byed, Sans:samskarasevana] is 7) Investigation [Tib:'du byed, Sans:samskaracintana], make an effort to identify the sinking and scattering, and apply prompt attention to ward off the distractions.

(E)  Antidote for the Imaginary or false effort [Tib:'du byed, Sans:samskarasevana] 8) is Equanimity [Tib:btang snyom, Sans:adhivasana]: relax and remain in equanimity after the counter measures have taken the effect, not overdoing or applying the antidote in excess.

Through the application of these eight antidotes to the five obstacles to meditation, one can gradually achieve Shamatha, a calm and serene mind. Therefore, the growth and cultivation of these eight qualities are very important. Having understood the shortcoming and remedy, one is now well equipped to get into the real practice of Shamatha meditation through the nine stages of meditation [Tib:sems gngas dgu].

The course of the Nine Stages of Meditation is conducted with the help of Six powers [Tib:stob drug] and the realization of Four attentions [Tib:yid byed bzhi].

The six powers, [Tib:stob drug]: The Nine Stages of meditation is initiated or sustained by the six powers or faculties. They are:

This is a brief introduction to sems gnas dgu, the Nine Stages of Meditation; The Five Obstacles, nyes pa lnga; Eight Antidotes, gnyen po brgyad; Six Powers, stops drug; and Four Mental Attentions, yid byed bzhi. Although it is said as Buddhist meditation, a close examination will reveal that there is nothing religious and dogmatic about this practice. It's purely a science of mind, no wonder Buddhism is also known as a science of mind. Therefore, these meditational techniques could be used by anyone, irrespective of any religious affiliation, for self realization, self development and to discover peace within and without. It is with this secular approach to our living, meditation has become popular and universal these days. 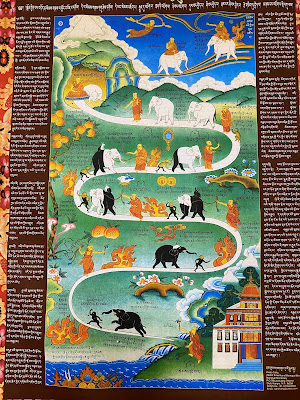 Note: This is the author's study note based on the readings and teachings received personally and online. Just as Shantideva has said, "rang gi yid la sgom chir ngas 'di brtsams",( I composed it to remember and to reflect on what I have studied.) But serious students of meditation are advised to consult Tibetan masters and study the references mentioned below.

Posted by Miudhungdrug at 8:34 PM No comments: