Let's walk looking up in the sky

So that the tears don't fall down on the ground

Posted by Miudhungdrug at 11:54 PM No comments:

A short note on Lungta, a Tibetan prayer flag and its origin

If you happen to visit any Tibetan settlements or villages, your eyes will be greeted first with colorful flags hung horizontally on trees in the hills and ridges, and on the rooftops. These are Tibetan prayer flags commonly known as Lungta darchog [Tib: rLung-rta dar-cog], air-horse or wind-horse flag. This is the same with people living along the Himalayan regions practicing Vajrayana Buddhism and sharing Tibetan cultural bonds.

Lung [Tib: rLung] means air or wind, and Ta [Tib: rTa] is horse. So, Lung-ta means an air-horse or a wind-horse. It is a divine horse to lift our energy and life force and carry our message to the gods and deities.

What is this Lungta prayer flag and what does it signify. According to Tibetan medical and astrological system, for the holistic health of a person, assessment of the five aspects of the individual, i.e. Lus, la, srog, wang and lungta, [Tib: lus, bla, srog, dbang and rlung-rta][1] is very important. They can be roughly translated as, body, life-force (energy), life, power, and fortune. It is the last, Lungta, the fortune or luck aspect that pervades the overall well being of the individual.

Fortune here is not about the material wealth and riches. It is about the overall aspects of your being and existence, the vital force. How things go smoothly or not is generally attributed to the level of your Lungta. A high level of Lungta [Tib: rLung rta mtho po] will ensure smooth and successful completion of your work and aspiration, while a low level of Lungta [Tib: rLung rta dma' po] does the opposite. 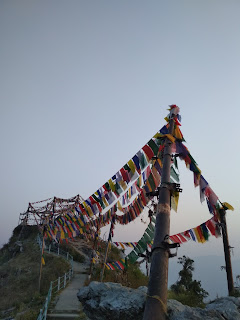 Lungta was originally written in Tibetan as kLung-rta and later as rLung-rta, meaning Air-horse. This Air-horse is the carrier of your fortune and vital force. The faster it runs, the better it is for the individual's well being. We say "De ring rLung-rta rgyud song.", today my Air-horse ran, meaning things went very well  or all positive elemental forces were conducive that day. There are terms like, Lungta darba, Lungta gyaspa and Lungta gyugpa, meaning flourishing lungta, expanding lungta and running lungta, these are all positive Lungta. Negative Lungta are: Lungta chagpa, Lungta nyampa and Lungta gudpa, meaning, fallen lungta, diminishing lungta and downfall of lungta. There is a Tibetan proverb[2] which says, there is no doubt about my shooting, whether it will hit the target or not will depend on my Lungta.

Therefore, care is taken to keep this Air-horse in good health and running. Lungta prayer flags are hoisted on auspicious days, especially during the Tibetan New Year, Losar. When things are not going well and smoothly, people often hoist Lungta flags and perform Sangsol [burning of juniper or herbs]. Propitiation of deities with offerings and prayer recitation are done to activate one's Lungta. 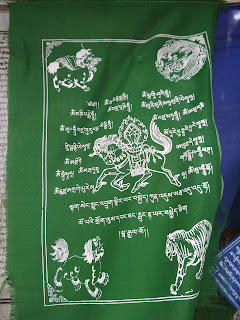 Now, let us examine what a typical Lungta prayer flag looks like and what is written on the flag. It comes in five thin rectangular or square cotton clothes in five colors: yellow, green, red, white and blue. These colors represent the five natural elements: earth, water, fire, air and space. In the four corners of the flags are four animals: a Tiger at the bottom-right; a Lion at the bottom-left; a Garuda at the top-left; and a Dragon at the top-right. In the center is the Air-horse carrying the wish fulfilling jewel, and prayers to remove obstacles are written in between the animals.

What these animals represent, we have already discussed the main Lungta, the Air-horse. Astrological and elemental connotation is: Tiger represents Lus and forest; Lion - bLa and Snow mountain; Garuda represents Srog and sky; Dragon - dBang-thang and lake (klung); and Horse - rLung-rta and cloud. But Prof Samten Karmay notes that the ancient manuscript has the lion representing Lungta and horse the bLa[3]. General assumption is: Tiger represents bodily health; Lion represents soul's health; Garuda represents life-force; Dragon the power; and Horse, the fortune[4]. 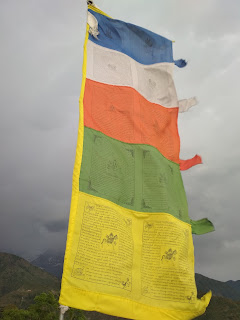 Through Lungta prayer flags, the health of our fortune is activated which in turn ensures a strong life-force, healthy body, powerful presence and vital soul.

One important question is how did this Lungta concept originated? Is it a Buddhist culture or does it have its origin from the native Bon religion. Manuscript or reference materials on the subject are very scarce. An ancient manuscript by the title of "dBu nag mi'u 'dra chag', Appearance of the Little Black Headed-man, compiled and translated by Prof Samten Karmay[5] takes us back to the Tibetan mythical era and gives us some useful information on the origin of Lungta prayer flag.

Prof Karmay says, "Although the manuscript is attributed to Emperor Khrisrong Deutsan [742-797], but in the text there is reference to Kublai Khan. It therefore cannot pre-date the thirteenth century." It talks about six songs or poems dealing with the origin myths of the universe and the Tibetan people. From the cosmic egg emerged a being Sridpa Sangpo khri, also known by Yemon Gyalpo, the King of the primeval wish. From him came the Phyva, dMu, gTsug, gNyan, Ye, and Ngam came. They are the ancestors of the gods, spirits and humans. 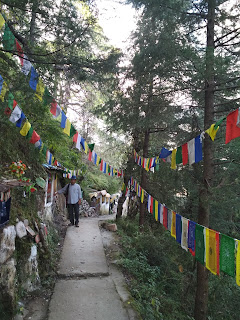 Sridpa Nekhrom [Tib: Srid pa sNe phrom], the youngest of the thirty-seven children of Phyva God Yablhadaldrug, was sent to the earth to establish human race. He lived with a Phyva woman and through their son, Thingpo, came the ancestors of Trom, Gya, Hor, Bod, Jang and Mon[6] [Persia, China, Mongolia, Tibet, Yunan and India].

When the father Khritho was tending yaks on the mount Lhari, seven robbers from the demon land robbed him of all his yaks. Furious, he charges them, but his wife gNyan-bza worries that he may come to harm if he pursues the robbers. So she turned herself into a big frog and tried to block his way. Not knowing that it was his wife, Khritho in his rage kills her. Her painful cry alerts her father gNyan-rgan de-ba, he shoots a lethal arrow and kills Khritho.

The six brothers, sons of Khritho, vow to avenge the father's death, first they sought compensation from gNyan-rgan de-ba, and they received dragon, eagle, yak, tiger, goat and dog accordingly. The last two brothers, dBa' and lDa, were not happy with the compensations, goat and dog, and was said to have left for the borderland. These six brothers are popularly known as Meudung-drug, the six original tribes of Tibet, se, mu, dong, tong, dra and dru.[7]

The four brothers took the four animals as their respective Dra-la [Tib:dGra-bla], protective war gods, arousing the warrior spirit and proceeded to conquer the robbers from demon land who were the cause of their father's death. The story goes on how they ultimately subdued the demon king Khappa-lagring. These four animals became the symbols of the major major races of Tibet, lDong, bBra, 'Gru and sGa. Later, these animals were propitiated on the rLungta flag to represent the fortune and well beings of the Tibetan race. Prof. Samten Karmay says that the yak may have been replaced by a lion around the time when lions became the national emblem of Tibet[8].

China has something called Long-ma, 'Long' in Chinese means dragon and 'Ma' means horse, therefore, a Dragon-horse. Some scholars say rLung-rta is derived from Chinese Long-ma. If it is so, then it should be 'Brug-rta in Tibetan not rLung-rta. Tibetans could not have taken Long in the sense of pronunciation (sound) and Ma in the meaning. Dragon represents power, wealth and fortune in Chinese culture, and is considered as an auspicious symbol. 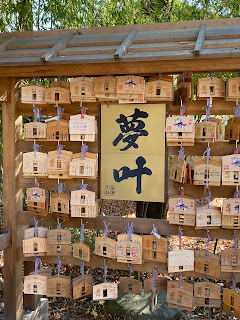 In Japan, there is something similar to rLung-rta called 'Ema', written as 絵馬 meaning 'picture horse'. It is a small wooden tablet with a picture of a horse. It has its origin in native Shinto religion; it is now found in both Shinto shrines and Buddhist temples. People write their wishes and prayers on an Ema tablet and hang the same on the Ema board of the shrines and temples. Horses are believed to carry the message to the Kami, spirits and gods. During an auspicious event the shrines and temples burn these Emas signifying the consummation of the devotees' prayers and wishes.

These Lungta prayer flags represent the typical Tibetan culture honoring interdependence and need for harmony among gods, elements [planet], human, and animals. It reveals the deep reverence that Tibetan culture holds for the gods and spirits above; respect for the natural elements; and the love and harmony with the animals around. This is further reflected in Zamling Chisang [Tib: 'Zam gling spyi bsangs][9], a universal prayer day. It is a prayer day dedicated to the world peace and harmony observed by the Tibetans since ancient time.

Therefore, many social-scientists around the world are of the view that the understanding and preservation of Tibetan culture is not only necessary but indispensable and must for the world peace and harmony. 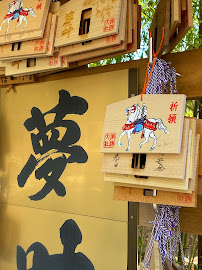 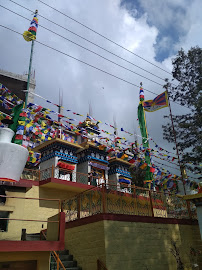 [1] This sequence is based on oral narrative sTag, sengs, khyung, 'brug and rta, and the pictures on the flag. Mentsekhang astrological Lotho has the following sequences: Srog, lus, wang, lung, and la [Tib: srog, lus, dbang, rlung-rta and bla].

[9] Zamling Chisang falls on the full moon day of the 5th month of Tibetan calendar, usually in the month of July. It started during the reign of the 8th century Emperor Trisrong Deutsan, when Guru Rinpoche performed prayers and purification rites on the successful completion of the Samye monastery. Since then it evolved as a prayer day dedicated to the world peace and harmony.

Posted by Miudhungdrug at 5:05 AM No comments: