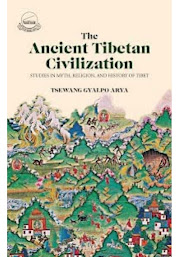 The book is based on the author's research in some grey areas in Tibetan study where more research needs to be encouraged to bring out the full extent of study in Tibetan myth, religion, and history. Tibet is an ancient nation with rich indigenous myths, religion, and history dating back to more than 1000 BC[1]. Scientists have said that human civilization existed in Tibet as far as 12,000[2] years back, and primitive tools and implements found in the regions date back to some 8000 years[3]. But in most of the Tibetan work and literature, it had shown as if the Tibetan civilization started from the 7th century only. Not much is discussed about pre-7th century Tibet. What little discussion found on the subject, too, is not aligned with the time and facts. The question here in the book is - does Tibet have any indigenous myth, religion, and history before the 7th century CE?

Buddhism from India brought enormous change in Tibet and greatly enriched the Tibetan religious and cultural history. But much before the advent of Buddhism in the 7th century, there existed an indigenous religion in Tibet, which sustained the Tibetan culture and greatly influenced the neighboring regions too. As Buddhism gained a strong foothold and support in the land, indigenous religion and values suffered discrimination. Ancient myths and values were cast into oblivion. New myths of Indic affiliation ascribed significant aspects of Tibetan civilization, the origin of the Tibetan race, the first King of Tibet, Tibetan language, etc., to India.

As native values were castigated, Bon scholars too began to assert the origin of Bon religion to some Tagzig [Tib:sTag-gzig], a distant land supposed to be Persia of the time. In this way, Bon and Buddhist scholars, the two foremost authorities in Tibet, competed in ascribing the native wisdom and culture to Tagzig and India. Therefore, despite being an ancient civilization with rich history and culture, we find some serious contradictions in Tibetan myth, religion, and history, which do not corroborate the history and ancient nature of the Tibetan civilization.

Contrary to popular belief, the research hypothesis established here is that Tibet's myth, religion, and history dates back to 1000 BCE. The first king, Nyatri Tsanpo, appeared much before 127 BCE and was of Tibetan origin. An ancient Zhangzhung civilization greatly influenced Tibet and the neighboring countries along the Himalayan ranges. The 33rd King Srongtsan Gampo lived for 82 years, and there existed some form of writing system in Tibet before the 7th century CE.

Bon, the indigenous religion of Tibet, has greatly influenced Tibetan civilization and culture. But unfortunately, it is not openly embraced because of the persecution it suffered in the early period of Buddhist supremacy. Therefore, understanding the Bon religion and Zhangzhung civilization is imperative to get a broader picture of Tibetan history and culture.

The popular Tibetan origin myth based on the Buddhist theory, Boddhisattva monkey and rock ogress, of Tibet and Tibetans coming after the enlightenment of Buddha, has failed to stand the test of the time. Jampal Tsagyu, the text on which the statement is based, does not touch anything about Tibet and Tibetans. The origin of the first Tibetan king Nyatri Tsanpo as an Indian Shakya king or the descendants of Pandava or Kauravas of Mahabharata too has been found invalid[4]. The traditional native theory of origin myth of cosmic egg and the first king as the descendant of god has been found more mythically rationale.

Chronology of the Tibetan kings with Nyatri Tsanpo at 127 BCE, 28th King Lha Thothori at 173 CE, and the 33rd King Srongtsan Gampo at 617 CE does not flow well to explain the existence of 43 Kings of the Yarlung dynasty[5]. The study has found it more reasonable and scientific to put Nyatri Tsanpo beyond 127 BCE, Srongtsan Gampo's birth at 569 CE.

The book dwells on the importance of the Zhangzhung kingdom and the indigenous Bon religion to prove the existence of advanced civilization in Tibet since early times. The origin of the Tibetan script and writing system has been discussed from a new angle to encourage a fresh perspective to look at the subject.

In a nutshell, the book presents some strong working hypotheses for young scholars to work on. If the book could offer a glimpse of what is obscured and unexplored but vast area of study in the field of myth, religion, and history of Tibet, the author's purpose would be more than fulfilled.

Link to buy paperback from Amazon.in:

[2] Tibetan Lived in Himalayas Year Round Up to 12,000 Years Ago by Laura Geggel, Senior Writer / Jan 5, 2017. Live Science. [http://www.livescience.com/57403-humans-inhabited-tibet-mountains-earlier-than-thought.html]

[4] Three popular theories based on ancient texts have been discussed. Indian Mahabharata and Tibetan versions were compared and studied. According to Dr. P.V. Vartak, the Scientific Dating of the Mahabharata War happened around 5000 - 3000 BCE

Posted by Miudhungdrug at 11:49 PM No comments: