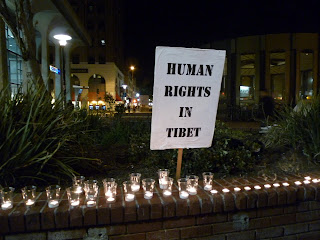 Berkeley: Tibetans in San Francisco Bay area gathered at Downtown Berkeley in the evening to pray and to honor the martyrs in Tibet, who sacrificed their lives by self-immolation to demand freedom and justice in Tibet, and the return of His Holiness the Dalai Lama from exile. Tibetan Association of North California (TANC) organized the gathering and the march.

Since March last year, Tibetans in Tibet have resorted to self-immolation to raise their voice against the Chinese oppressive regime. Two young men, Tsultrim and Tennyi joined the list of martyrs on January 6. They self immolated themselves shouting for Tibetan independence and return of His Holiness the Dalai Lama. They were both in their twenties. Before the people could recover from their selfless patriotic acts, Sonam Wangyal, a highly revered monk committed self-immolation to protest the Chinese occupation and brutality. He is the fifteenth martyr to join the list of Heroes, who sacrificed their lives for their motherland, Tibet.

Ms Victoria Dulard, the US States Department's Spokesperson, in her recent press briefing said that the United States is aware of the critical situation in Tibet, and that these act of self-immolation represents enormous anger, enormous frustration among the people in Tibet. And that Chinese government should adopt more productive policy to resolve the issue.

There were about sixty Tibetans and supporters at the gathering. Recitation of Tibetan prayer was done, and the participants raised slogan demanding freedom and justice in Tibet. Carrying Tibetan national flags, placards and candlelight, the participants marched along the busy Shattuck Avenue chanting Buddhist prayer "Byangsem" invoking the spirit of Boddhisattva, a compassionate heart to help the sentient beings.

Passerby conveyed their support to the candlelight march by raising their thumbs, and giving honks. Participants talked about the situation in Tibet, some said that while reciting the "Byangsem" prayer, they meditated on Hu Jintao and other Chinese communist leaders, so that the good spirit of Boddhisatvas may be born in them, and the situation in Tibet and in China is improved.

It is high time that the Chinese communist leader open up to the reality and listen the grievances of Tibetan people, and stop oppression and killing in Tibet. They must acknowledge that Tibet is not a socialist paradise as they claim, in fact, it has become a large prison under the communist regime.

At the end of the candlelight march, a TANC executive thanked the participants and informed them about a forthcoming event on January 27th at UC Berkeley to highlight the Tibet issue and self-immolation. Tendor la, Executive Director of Students for Free Tibet is scheduled to visit and give a talk on the issue. 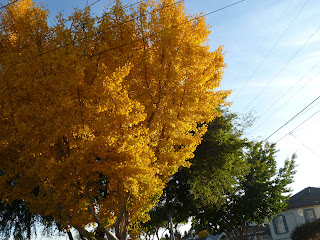