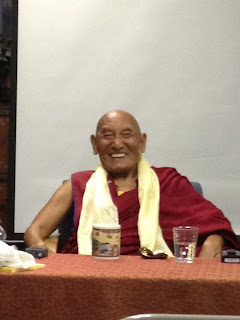 San Francisco: A renowned former political prisoners and Tibet activist, Ven Palden Gyatso visited San Francisco East bay area today, and gave talk to the Tibetans in the area at the community hall. The regional Tibetan Youth Congress organized the meeting. The veteran Palden despite being in his 80s was full of energy and humor. He spoke on his life, how the communist Chinese invaded Tibet; how he was imprisoned; and how his unrelenting attitude to bend before the dictates of the foreign rulers got him into trouble and how his prison term accumulated to 33 years. He spoke about the prison life and incident involving many patriots who gave their lives for Tibet. Many in the audience were drawn to tears, and yet the Geshe was full of energy and dynamism.


Palden Gyatso, born in 1932, was imprisoned during 1959 uprising against the Chinese occupation of Tibet. He underwent numerous hardship and torture in the prison. He was forced to claim loyalty to the Chinese regime and condemn the Tibetan society, but the monk stood firm that Tibet is an independent nation. His book “Fire under the snow” has been translated in more than 28 languages. Palden Gyatso is the symbol of Tibetan equanimity, yet resilient and firm in our conviction that Tibetans will fight to the last man to regain our rightful freedom and justice. He is the living testimony to the fact that so called "Socialist Paradise" in Tibet is just a blatent lie the Chinese communist leadership concocted to justify their occupation of Tibet.
More……
Posted by Khawaripa at 12:06 AM