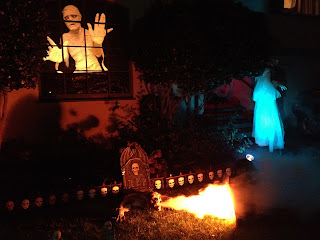 San Francisco: The eve of October 31 is a great evening of excitement and fun for the children here. The children dress themselves up in their favorite ghostly characters and move around the neighborhood knocking doors and chanting, "Trick or Treat". Meaning either they should be given something to eat, or the owner face a trick or mischief. Usually, the children were given sweets, chocolates and other eatable things. Many of the houses are decorated in a ghostly style; very scarring and frightening. People have a big yellow pumpkin hollowed and curved to a demonic face with a light inside. It is called Jack-o-lantern. It gives a very scary sight in the night. Originally, a carrot was used; later an apple and when it came to the States, pumpkin came in.

Halloween is widely celebrated in the Western world. It is said that it came to United States along with the Irish immigrant [after the potato famine in the region] in 19th century. It is an age old festival of Celtic Irish tribes dating back to BC era. In early days, October 31st is the end of the summer and the harvest season, and is celebrated as festival of Samhain [summer-end]. It is also to thank the Sun for the good summer, and pray for its early return from the harsh winter. Samhain is sometime referred to as the lord of death. From November 1st, it is the start of the New Year, and the long harsh winter. At the end of the year, the lord of death Samhain let the spirit of the people died during the year to visit their home, and sometime cause harm and possess the living people. In order to ward off the spirits and the ghosts, tradition came up that the people dressed themselves up in ghostly styles to avoid, confuse and to scare the real ghosts away.

It is also sometime referred as Roman festival of the dead, when the dead returns to their home for feast and treat on the eve. People leave some eatable things outside so that the dead could pick it up and go away. If the dead are not treated to a feast, they tend to harm the people living in the house. This is construed as the origin of “trick or treat” chanting. 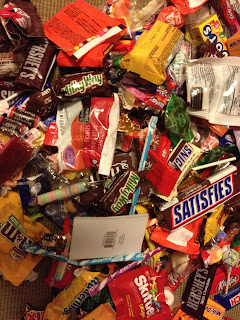 Later the Roman amalgamated this festival with one of theirs to propitiate the Roman goddess of fruits and trees, Pomona. Christian culture worked further on to turn this festival to celebrate the "all saints eve". November 1st was celebrated “all saint day” to honor all martyrs and saints. The Etymology of the word Halloween became "all hallow evening". Much of the ancient meaning and purpose of the event is lost, but today it is celebrated as one the most awaited children festivals. Above is an iceberg information on Halloween, the festival is very old, and many explanation can be found about its origin and the purpose by many scholars and folklorists.

Now, many Asian immigrants have also taken to enjoy the festivals. It was heartening yet at the same time frightening to see many Tibetan kids also in ghostly attires going around chanting "trick or treat".

Above is a picture of candy, sweets, chocolates and other eatables what one child gathered  during the 'trick or treat' visits.
Posted by Miudhungdrug at 1:10 PM