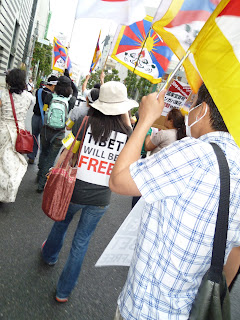 Tokyo: [May 22, 2011 Sunday] Around eighty Tibetans and Japanese gathered at Jingudori Park in Tokyo to protest against the siege of Kirti Monastery in Amdo province of Tibet by Chinese army and the injustice that is going on in the region. Student for Free Tibet (SFT) Japan chapter and Tibetan community in Japan organized this protest march on the day to coincide with the visit of the Chinese Premier Wen Jiabao in Tokyo.

President of SFT Japan chapter Mr. Tsering Dorjee welcomed the participants and described the grave situation in Kirti monastic area and the police brutality. He said that the SFT has written to Japan's Foreign ministry on the issue to request the Japanese government to weigh on the Chinese counterpart to deal with the situation peacefully and to release the people arrested unjustly.

Mr. TG Arya of Liaison Office of His Holiness the Dalai Lama thanked the organizers and the participants for their concern and interest in Tibet issue. He said that this protest march is not to protest the visit of the Chinese Premier, but to draw his attention to the great injustice happening in Tibet in general and Kirti monastery in particular at the moment. While we welcome good relationship between Japan and China for peace and stability in Asia, through this protest march, "we strongly appeal to Premier Wen Jiabao to stop the police brutality and the infamous 'patriotic reeducation' campaign in the monastery, and try to resolve the Tibet issue peacefully." He said.

Ven. Kawahara of Reingein Monastery said that the Japanese public and government should not stay aloof to what is happening in Tibet. Problem in Tibet is not a political issue; it is issue of freedom, justice and morality. As Buddhist practitioners, we all must raise our voice against injustice perpetrated against the monks in Tibet. 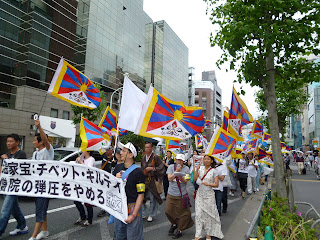 Note: The wordings in Japanese on the front banner reads: Wen Jiabao, Stop Oppression in Kirti Monastery in Tibet.

Demonstrators marched through the busy Meijidori street of Shibuya carrying Tibetan flags and raising slogans "Free Tibet, Tibet for Tibetans, We want freedom, Stop Oppression in Kirti Monastery" etc. Being Sunday, the street was full of pedestrians, who showed their support by waving and uttering slogans along with the demonstrators. Some participants have come all the way from faraway regions like, Kyushu, Osaka, Nagano etc. Local police authorities have also arranged good number of security people to ward off any untoward incidents.

Wen Jiabao is in Tokyo to attend the trilateral summit among Japan, China and South Korea on disaster relief and nuclear safety, and other issues relating to trade and commerce in view of the difficulties that Japan is facing due to earthquake, tsunami and nuclear disasters. Critics say that Chinese Premier will use this summit meeting opportunity to visit the earthquake and tsunami affected areas to gain the goodwill of the Japanese public.
Posted by Kawaripa Taro at 2:49 AM