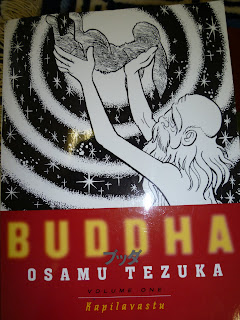 Last year I came across this manga 'Buddha" by Osamu Tezuka, I found it very interesting and lively. It is also very revealing, it talks about many things about Buddha's life and times, some of which we have not heard and are not usually found in Buddhist literatures. Osamu Tezuka [1928-89] is a well-known Manga writer in Japan; he could not have concocted the story without any reliable background facts to corroborate his story.

The manga became very popular around the world. This year anime-movie 'Osamu Tezuka's Buddha – The Great Departure' directed by Kozo Morishita has also come up. While I found the book interesting, I have not yet seen the movie. But the book tells us many things, though interesting, authenticity of some episodes and characters are doubtful. If it is fiction, then Osamu is not doing justice to the great master and the times, and to the history.

To cite one example, the story tells us of an interesting episode about a woman in Siddhartha's life, and how ultimately Siddhartha parted from her and married with Yashodhara. It was depicted in the manga that around that time, evils of the caste system were at its height. Low caste people were greatly discriminated and oppressed. But these low caste people have grouped themselves and mastered the art of fighting – wrestling, sword, bows, horse riding etc. to fight the injustices. Migaila, a young beautiful woman was one among them. She and Siddhartha were in love.

King Suddhodhana arranged Siddhartha's marriage with Yashodhara from a royal clan. Not wanting to be tied to nuptial noose so early, and to procastinate the marriage, Siddhartha asks his father that a duel should be arranged among the princes and contenders, and the winner should have Yashodhara as his wife. King Suddhodhana, though not very sure of his weakling son, was impressed about his courage to abide by the custom. So, the announcement was made for the duel.

When Migaila heard about this contest, she participates in the duel disguised as a young warrior. She secretly sneaks into the palace and meets Siddhartha, together they make a plan. Adopting various tricks, the plan was to have Migaila and Siddhartha come to the final contest, where Siddhartha will lose to Migaila. Rigging and matching fixing comes in. Everything goes as planned, but at the last phase when she and Siddhartha were feigning contest, her identity gets exposed. When the King comes to know that she and Siddhartha had been courting, he was wild with rage and sentences her to death.

The prince, on hearing that his beloved has received death sentence, he beg his father to spare her life. Suddhodhana agrees on a term that if Siddhartha agree to marry with Yashodhara, Migaila's life will be spared. Siddhartha agree to this term, but he was shocked to hear later that his father has had his men take out the eyes of Migaila and banished her.

Characters like, Chapra, Bandaka, General Budai of Kosala are very interesting. One thing I can tell the readers is that if you start reading the book, it will not let you go off until you have finished the last page. The way Osamu Tezuka tells the story in Manga is something all the cartoonists and storytellers should learn. I hope to see the movie in the near future.
Posted by Kawaripa Taro at 12:10 AM