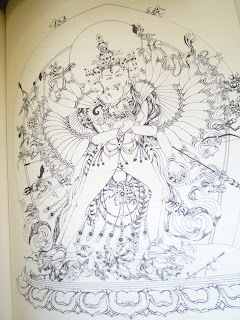 His Holiness the Dalai Lama would be giving his 31st Kalachakra teaching in Washington DC in the month of July. There are people who are in dilemma as to whether they should participate in the teachings or not because of their meager knowledge in the field. To them I say - if you have a pure good motivation, you should do so.

It is a common knowledge that all beings, including the small insects, desire happiness and avoid sufferings. In the process of finding true happiness, we are often confronted with sufferings. Lord Buddha taught us to contemplate on the cause of sufferings, so that we can avoid it and uproot it, and achieve eternal happiness – Nirvana and Buddhahood.

Lord Buddha taught us the way to overcome this delusion and achieve ultimate peace in the form of enlightenment. The practice involves cultivating the three higher trainings of self-discipline, meditative concentration, and the wisdom understanding emptiness. Buddha's teaching can be interpreted, practiced and understood from two major yanas, vehicles – Hinayana and Mahayana, thegmen and thegchen.

Hinayana, the lesser vehicle is Theravada Buddhism. Here the practitioners practice to overcome the mental delusion and gain insight into the ultimate nature of emptiness to achieve Nirvana for themselves.

Mahayana, the greater vehicle, can be further divided into – Paramitayana and Vajrayana. mDo and bsNags. In Paramitayana, the practitioners, besides practicing what the Hinayanist practice, they cultivate Boddhicitta mind to achieve Buddhahood to help all the sentient beings.

Vajrayana or Tantrayana, is esoteric form of Buddhism. Besides the Sutra practice, it involves Tantra also. The wisdom that realizes the profound emptiness is same in Paramitayana and Vajrayana, differences lies in the methods. Vajrayana adopt methods, which involves practice of deity yoga – meditating on oneself as having an aspect of similar to that of a Form body. This practice is divided into four classes - Kirya, Charya, Yoga and Anuttara Yoga.

Kalachakra teachings belong to the highest yoga tantra class of Anuttara Yoga, where the Kalachakra deity Viswamata is meditated upon and visualized. Buddha taught the Kalachakra tantra at Shri Dhanyakataka, in South India at the behest of Suchandra, the first kalkin of mystical kingdom of Shambhala. The teachings prospered in Shambhala and came back to India and spread to Tibet only around 10th century. From the time of Dro Lotsawa, Buton Rinchen Druppa to Tsongkappa, Kalachakra empowerment was passed on from one Tibetan master to another successively, in this way we have His Holiness the Dalai Lama, one of the lineage holders to this day to give us the teachings.

Tantras are sacred secret teachings usually taught only to a few accomplished practitioners. Kalachakra teachings, although is one of the highest yoga tantra, it is given to a vast congregation of public of all spiritual caliber. According to His Holiness the Dalai Lama,

"Certainly, not everyone who attends will have a sufficient inner basis to receive the full benefits of the initiation, but it is believed that anyone attending with a positive attitude will establish and strengthen positive karmic instincts."

In all the above cases, the most important requirement to receive the teachings is the participants' altruistic motivation to benefit whole sentient beings. Therefore, motive behind receiving the teachings should be very pure and magnanimous. As for the world peace, it is to be noted that the power and blessing from the assembly of a great multitude all driven by pure altruistic motivation is bound to influence and generate a conducive force and environment to build a peaceful world without war and violence.

It can also be said that the participations in Kalachakra teachings enables the participants to pray and to sow a karmic seed to get reborn in the mystical land of Shambhala to further their practice of the teachings.