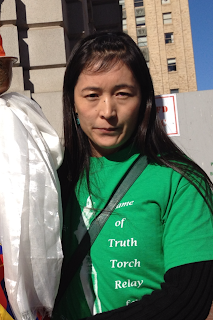 San Francisco: Tibetan Association for North California (TANC) organized a benefit dinner gathering today, a solidarity event to show support to Lhamo Tso, the wife of Pawo Dhondup Wangchen. A good number of Tibetans in the area turned up to show their support and concern.  Dhondup Wangchen is the young man who in 2008 visited Tibet to record the feeling and opinion of Tibetans on Beijing Olympic. He was arrested by the Chinese authority and was imprisoned without any trail. But the video recording he has done was smuggled out before his arrest. The video recording shown under the title “Leaving the Fear Behind” disclosed the real feeling of the Tibetans inside Tibet about Chinese occupation and the Olympic. Lhamo Tso and her husband are living martyrs, symbol and icon of Tibetan struggle. The fund raised during the event was all donated to Lhamo Tso. In her speech the lady thanked everyone for their support and said that she speaks not only for her husband but for all the political prisoners in Tibet.


Tibetan community should stand by her at this moment if Tibet wants more dedicated and sincere fighters like Pawo Dhondup Wangchen. Tibet will not die as long as we have a young dedicated couple like Dhondup Wangchen and Lhamo Tso.
Posted by Khawaripa at 10:37 PM