San Francisco: Eight-day Walk around the San Francisco bay area to highlight the critical situation in Tibet and to further the Tibetan independence movement started this morning at Tibetan community hall in the region. International Movement for Independent Tibet (IMIT) organized this long walk through the entire bay area to raise awareness about the situation in Tibet, and to show solidarity to the people of Tibet, and to send a clear message to the Chinese government that the international community is with Tibet. "The march for Tibet will cover 108 miles from the North California Tibetan community hall in Richmond through Oakland, down to San Jose and back up around the Bay at end at the Chinese consulate in San Francisco on March 30." said Ngawang Norbu, the member of IMIT from Boston. 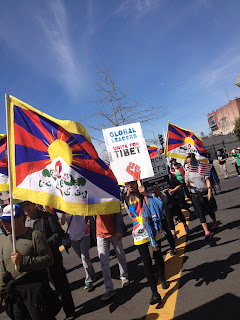 The participants came from all over the bay area; some western friends were also there to participate in the march. IMIT member Doug, who protested at the Tiananmen Square for Tibet during 2008 Olympic was also among the march organizers recording the events. The first leg of the march passed from Richmond to Oakland city hall passing through the grand busy San Pablo Avenue. The participants carried Tibetan flags, and placards demanding the Chinese government to "Free Tibet, Stop the Killing and Genocide in Tibet". People passing and driving through the San Pablo showed their support to the march by waving and honking their cars. 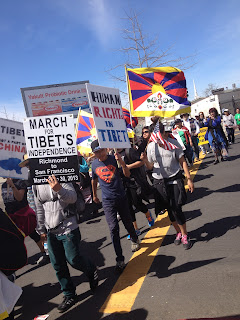 Police security cars and bikes came all along the walk and ensured security and safety of the march. People gathered at the Oakland city hall at the end of the first day's walk, where the gather ring recited "Prayer of truth" and sang Tibetan national anthem. 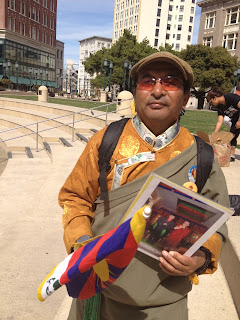 Mr. Tenpa, one of the core participants has the photos of His Holiness the Dalai Lama and Sikyong Lobsang Senge throughout the walk, when asked about this, “This is to tell the world and the Tibetans that we Tibetan have good and efficient leaders, and that we are not leaderless.” He said.
For more detail about the walk, please visit: http://www.circlethebayfortibet.org/circle-the-bay/

Posted by Khawaripa at 8:10 PM