Tibetan in North California observes candlelight vigil August 8, 2012 Wednesday Berkeley: Tibetans and Tibet supporters gathered near Berkeley BART Station this evening to observe candlelight vigil to protest the Chinese government for its continued repression in Tibet. Pictures and the profiles of the 46 people who committed self-immolation to protest Chinese occupation of Tibet were displayed at the venue. President of the Tibetan Association of North California briefly spoke on the critical situation in Tibet. He said this gathering is in conjunction with the completion of one-year by the Lobsang Sangay's cabinet in Dharamsala, which is being celebrated and observed throughout the Tibetan community in and outside Tibet. 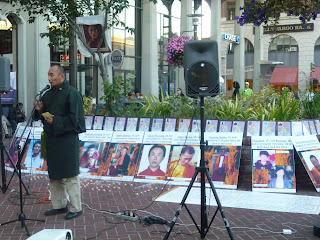 TANC President Mr. Tsedup briefing the gathering at Berkeley Members of Tibetan Youth Congress and Bay Area Friends of Tibet, and supporters joined to read the profiles of the martyrs, and pay respected to them. People sang Tibetan national anthem, and marched around the Berkeley Shuttuck avenues reciting Jangchub semchok prayer [generation of Boddhisatva's heart] carrying candles, Tibetan flags and slogan banners.
Posted by Kawaripa Taro at 11:38 AM